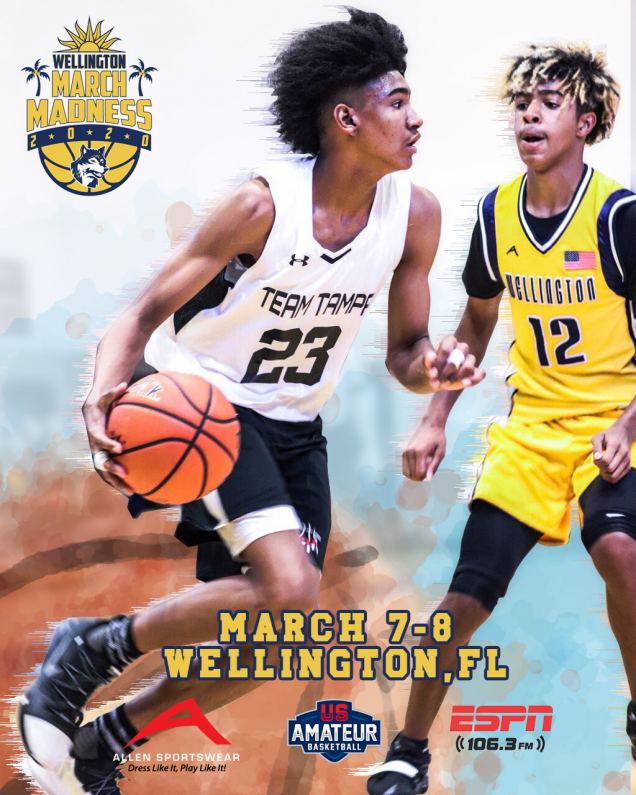 Tournament organizers hope to solicit donations for non-profit In Jacob's Shoes
WELLINGTON, Fla. - eTradeWire -- The Wellington March Madness Tournament is set to begin March 7th in Wellington Village Park, once again bringing the prestigious tournament to Palm Beach County. The tournament features 120 youth basketball teams, 5,000+ spectators, 20 courts in 18 locations within a 5-mile radius and has won the platinum award for the best ran tournament in the state of Florida for the past four years.

This year, the tournament will support In Jacob's Shoes, a non-profit children's shoe charity that provides new and gently used shoes, athletic gear, backpacks and school supplies to local children in need. The organization hopes to garner more than 2,500+ shoe donations during the tournament's March 7 kickoff. The competing teams are encouraged to bring their used shoes to get a chance to win brand new custom basketball uniforms, donated by Allen Sportswear.

"I'm really excited about getting all the teams from all over Florida and to come and play some great basketball, but also to work together to be able to donate 2,500 shoes to our youth athletes in need," said Chris Fratalia, President of Wellington Wolves Travel Basketball Organization.

The impressive line-up for the tournament includes Miami Heat Dancers and mascot Burnie, competitive teams such as the Florida Nets, St. Cloud Kings and Skills Center Elite, as well as local ESPN coverage.

"Once again, we expect a large showing and even more excitement on the court with talented players and enthusiastic fans," said Fratalia. "The event is about growing as competitive teams and as members of the community."

To commemorate the 15th anniversary of March Madness, the winning teams will receive championship hoodies, donated by Allen Sportswear, a large supporter of the community and youth athletic teams.

Based in Orlando, Florida, Allen Sportswear is a veteran-owned small business that designs pro-quality team sports uniforms. For over 15 years, Allen Sportswear has utilized the best in sublimated, tackle twill and embroidery technology to support clients in the AAU, US Amateur Basketball and USSSA circuits, high schools and colleges, as well as corporate clients such as Busch Beer and Mountain Dew. Allen Sportswear merchandise has made appearances in Superbowl ads, Tyler Perry's "Meet the Browns" and the NBA Celebrity "ELeague." Beyond providing high-quality sports apparel, Allen Sportswear has also given back to communities through grassroots sponsorships and philanthropy efforts, such as the donations and raffles hosted at the Wellington March Madness Tournament.

The tournament will kick off at the Wellington Village Park Athletic Complex at 11700 Pierson Rd, Wellington, FL 33414. Competing teams are encouraged to bring used shoes to donate on March 7 to get a chance to customize a basketball jersey and win new basketball uniforms by Allen Sportswear.