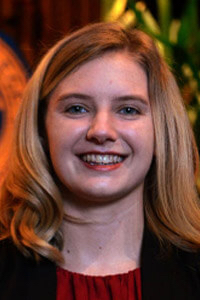 More on eTradeWire News
The Jeannette, Pa. native was diagnosed with Celiac Disease after experiencing migraines, unexplained weight loss and several other symptoms. She explains to her audience how the autoimmune disease has affected her life, and the importance of being aware of the disease for everyone, especially those who prepare food for someone with this life-changing, mentally draining, emotional and extremely physical disease. Thiel College Associate Professor of Biology Sarah Swerdlow, Ph.D. supervised Mesich's paper.

Students were supposed to present in April at the annual conference in Albany, N.Y; however, the conference was canceled. In an effort to recognize any student presenter who still wished to showcase work, the webpage was created.

At Thiel, Mesich is active in Chi Omega women's fraternity, National Society of Leadership and Success, Kappa Mu Epsilon honorary society for mathematics, Beta Beta Beta honorary society for biology, Lambda Sigma honor society for sophomores, Les Lauriers service honorary, Order of Omega Greek service honorary, the American Chemical Society, and the Thiel softball and golf teams. She was a super tutor for The Learning Commons, a resident assistant and a lab assistant for the Department of Biology. Mesich also raised money for Make-A-Wish, which is Chi Omega's philanthropic organization and worked with The Good Shepherd.

More on eTradeWire News
She is the daughter of Brian and Susan Mesich, of Jeannette, Pa.

Thiel College (https://www.thiel.edu/admissions) is a private liberal arts institution founded in the Lutheran tradition. Located in Greenville, Pa., the College offers 60 majors and minors, 24 varsity sports, and an 11:1 student-faculty ratio. A dedicated faculty paired with dynamic research and internship opportunities produce numerous graduate school and job placements. Coeducational from its beginnings, the College celebrated its 150th anniversary in 2016 and remains committed to combining tradition with innovation.