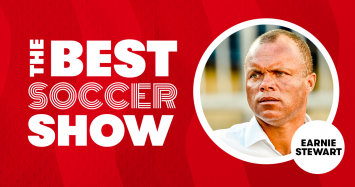 Jason Davis and Jared DuBois Talk "MLS Is Back," all aspects of the sport today with one of the most influential leaders in American soccer
PHILADELPHIA - eTradeWire -- For Soccer Ventures (FSV), today announced that "The Best Soccer Show" will make its debut this Wednesday on the FSV Podcast Network. Hosts Jason Davis and Jared DuBois welcome the current Sporting Director of the U.S. Men's Women's, and Youth National Teams, longtime USMNT star Earnie Stewart as their launch guest. The show will be available across all podcast platforms starting at 10 AM Wednesday, as well as a live broadcast on YouTube Live and Twitch Tuesday night.

"It is a pleasure to get this show back on the air and to have a legend like Earnie join us for the launch show to talk about the MLS bubble success and the future of the sport in America" Davis said. "Even during the pandemic the amount of interest in the game has not diminished as we have seen by the viewing numbers, and we are excited to get the discussion going."

As its first ever Sporting Director, Stewart oversees U.S. Soccer's sporting strategy for both the women's and men's game, making key hires and directing the organization on all things from the grassroots up to the National Teams. Stewart has similarly been tasked with implementing a style-of-play across the program to distinguish American soccer, while integrating all support staff from talent identification, sports science, data analysis, and more.

More on eTradeWire News
Stewart has 30 years of experience as a player andas the Sporting Director of AZ Alkmaar in The Netherlands, and Philadelphia Union of MLS. He played 18 seasons professionally and played in the 1994, 1998, and 2002 World Cups.

In addition to "The Best Soccer Show," an original blend of entertaining storytelling, quick quips, and sharp commentary that captures the spirit of American soccer fandom, the FSV Podcast network is hosting Orange Slices with former US international and Major League Soccer All-Star Heath Pearce as well as emerging U.S. international Mark McKenzie of Philadelphia Union.

A lineup of new shows and original content will also be added in the coming weeks.

About For Soccer Ventures

Launched in February 2020, For Soccer Ventures is the investment team managing Rich Graham's investments and philanthropic efforts in soccer, which represents a commitment in excess of $50 million. The group sources, acquires, and manages a portfolio of investments and businesses comprised of two key platforms: The Soccer Collective is a new media house leading a collaborative movement to celebrate American soccer culture and fan experiences through storytelling, activations and brand content development. The Soccer Alliance expands Graham's existing network of soccer properties with a focus on youth clubs, leagues and tournaments with the objective of improving the on-field experience for players and the American soccer family. Current properties and investments include a stake in Philadelphia Union, YSC Academy, YSC Sports, APL Leagues and Tournaments, The Soccer Collective, and The Soccer Alliance.