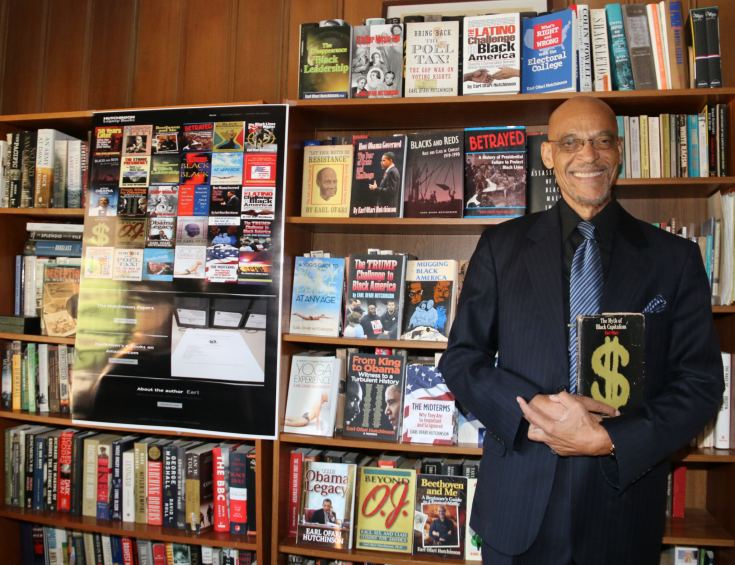 LOS ANGELES - eTradeWire -- Noted political analyst Earl Ofari Hutchinson in a new website Hutchinson Legacy Books chronicles and lists his half century plus listing of his books on race and politics in America. Many of his books have become collector's items. They still can be found on various book buying sites.

His first book published in 1970 the groundbreaking The Myth of Black Capitalism will be reissued by the original publisher Monthly Review Press in 2023 with a brand-new introduction. Hutchinson's lifelong writing mission was to assess, analyze, research, compile facts, pull them together, and tell a compelling and engrossing story of race and politics in America.

In 2022, he published his twenty-ninth and thirtieth books on a crucial political subject and issue. They were: The Midterms-Why They are So Important and So Ignored and Indicted-The Case for and Against Prosecuting Trump.

The range of topics that Hutchinson covers in his published books testify to that. Crime, racial violence, sports gender and racial disparities, trilogies on the Obama presidential years, probing books on Trump within and without the White House, race and gender issues, Black-Latino relations, a penetrating analysis of the radical thought of Dr. Martin Luther King Jr., the fight over voting rights, and the political wars between the GOP and Democrats. These topics are among the multiple subjects Hutchinson has authored books on.

More on eTradeWire News
Hutchinson has also stepped off the political book path to author books on his passions. They are classical music, yoga, and fitness. But politics remains his focus.

"Politics has been such a dominant and polarizing force in American life," says Hutchinson, "That it has spawned a massive growth industry in political books." Hutchinson for more than five decades has witnessed that growth and has stayed in the forefront of political analysis through his varied books.

Though he realizes that politics can be messy, complex, and a turn off for millions of Americans, Hutchinson has always kept his potential readership foremost in mind in his books. He writes in a simple, direct, plain-speaking style, designed to stimulate not just thought but also easy understanding of a political issue.

Hutchinson's books present to readers, authors, political writers, and all who relish political discourse, a complete selection of fifty plus years of political literary offerings. His focus has consistently remained on the always thorny issues of politics and race in America.