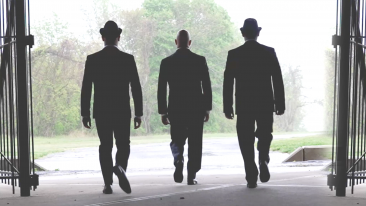 Executive producer/director/writer, Grayson Berry–known for his in-front-of-camera performances in 2021's DEADLY ILLUSIONS (with Kristin Davis and Greer Grammer) and 2019's DREAMLAND (with Margot Robbie)–assembled an up-and-coming cast and crew at the height of the pandemic.

Berry shared, "VORTEX is a direct reaction to the shutdowns of the pandemic both personally and professionally. I called members of the VORTEX team and said, 'Aren't you tired of sitting at home?  Let's shoot something…anything!' What we didn't know was how powerful and nuanced the pieces would become."

More on eTradeWire News
VORTEX: A Film Anthology offers a rare mix of genres, including sci fi, horror, suspense, film noir, dark satire and more, all seamlessly presented with an intriguing 'wrap around' featuring a character based on enigmatic inventor Nikola Tesla. VORTEX's tagline on IMDb gives some more context: "Nikola Tesla was a man with secrets and mysteries we could never imagine. Until now. Vortex: A Film Anthology takes us into the 4th Dimension, as the greatest visionary is forced through a gauntlet of lawless alternate realities."

Berry elaborated on the Tesla connection, "I've always been fascinated with Tesla…his inventions, relative obscurity, mysterious death, etc. When I brought the idea of having Nikola tie the whole thing together, I got immediate support from my team…which led to the title VORTEX, stemming from Tesla's Vortex Math. There's a unique energy in each piece due to the Tesla connection. It's hard to describe…it needs to be experienced. We're honored Indie Rights Movies understood that energy and joined us on the journey."

More on eTradeWire News
A Texas native, Berry was joined in his efforts by fellow New Jersians Raffaele Marchetta and Thomas Ryan Ward, whom he had met while working on a musical theater project a few years prior.  Both Marchetta and Ward shared their time and talents as writers, directors and performers but also excelled as producers as well.

Ward enthused, "Coming mainly from a stage background, I was over-the-moon about working with Grayson. His professionalism cultivated a collaborative atmosphere throughout the process…from script creation to choosing locations, casting, crew selection…and especially on set. Marchetta added, "As a huge sci fi/horror fan, making VORTEX has been an amazing ride.  We all got to bring our interests to the table. We made films that we would want to watch…not what the industry thinks will sell. I think people who watch the movie will appreciate that difference."

VORTEX: A Film Anthology, distributed by Indie Rights Movies, is streaming now on Amazon Prime Video and Google Play, to be followed soon by Apple TV, Tubi, Roku, and others. Learn more at https://www.vortexanthology.com