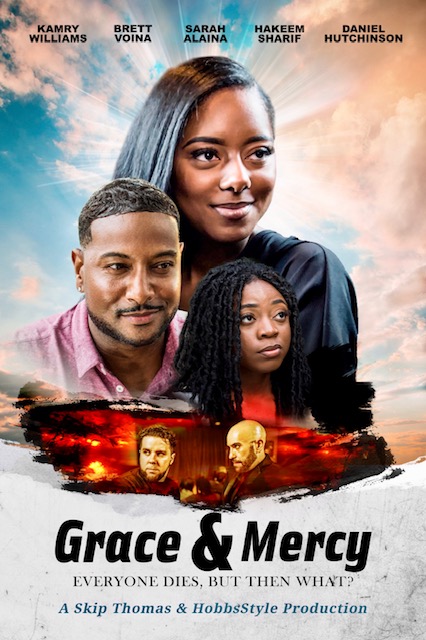 While climbing the corporate ladder, Grace Lawrence has worked herself to death…literally. But getting into Heaven isn't that simple. She now has 7 days to learn all of life's lessons before she meets with The Most Merciful who will determine her ultimate fate.

The film was written by award winning Director Mike Berry, best known for productions such as A State of Mind, Hey Mr. Postman and Rent Due.  "I wanted to have some fun with this film and give people a reason to laugh during these trying times," says Berry.

"We utilized all local cast and crew," says Tina Hobbs who is the producer and casting director, "It is important for us to showcase talent from Ohio.  Actors commanding the screen include Kamry Williams, Brett Voina, Sarah Alaina, Hakeem Shariff and Daniel Hutchinson.

More on eTradeWire News
Sarah Alaina debuted in her first major role with this film.  She is the producer's daughter but  says she received no special consideration.  "I had to go through the audition process like everyone else.  I have significant training under my belt and I am happy for the opportunity to show the world my talent."

Production for Grace & Mercy  wrapped this past fall.  Show times, ticket information and updates can be found at Red Carpet Premier Information.

ABOUT MIKE BERRY
Mike Berry is a writer, filmmaker and motivational speaker.  He began his career as a rapper under the stage name Big Gank recording a Top 100 Billboard Album and a Top 20 Billboard single,  being one of the first unsigned artists to tour with MTV's Rock-the-Vote campaign.  In 2011, he began producing and directing award-winning screenplays including Rent Due, A State of Mind, Banger  and Hey, Mr. Postman.  Recently he re-launched his highly acclaimed novel The Dangerous Times through Oasis Publishing. In addition to filmmaking, Berry is a motivational speaker and founder of the non-profit organization, Release The Pressure, which brings awareness and support to individuals suffering from depression.

More on eTradeWire News
ABOUT TINA HOBBS
Tina Hobbs is owner of HobbsStyle Casting & Production which houses all of her production services. Since 2011, her company has cast and produced numerous projects including feature films, short films, television shows, music videos and theater productions.  Specializing in independent film, Hobbs hosts the bi-annual "Schmooze" which is a widely attended networking event designed to connect industry professionals.  She also has experience as a location scout and teaches Media and Filmmaking classes at Cuyahoga Community College for aspiring filmmakers. Hobbs is dedicated to developing quality global entertainment.