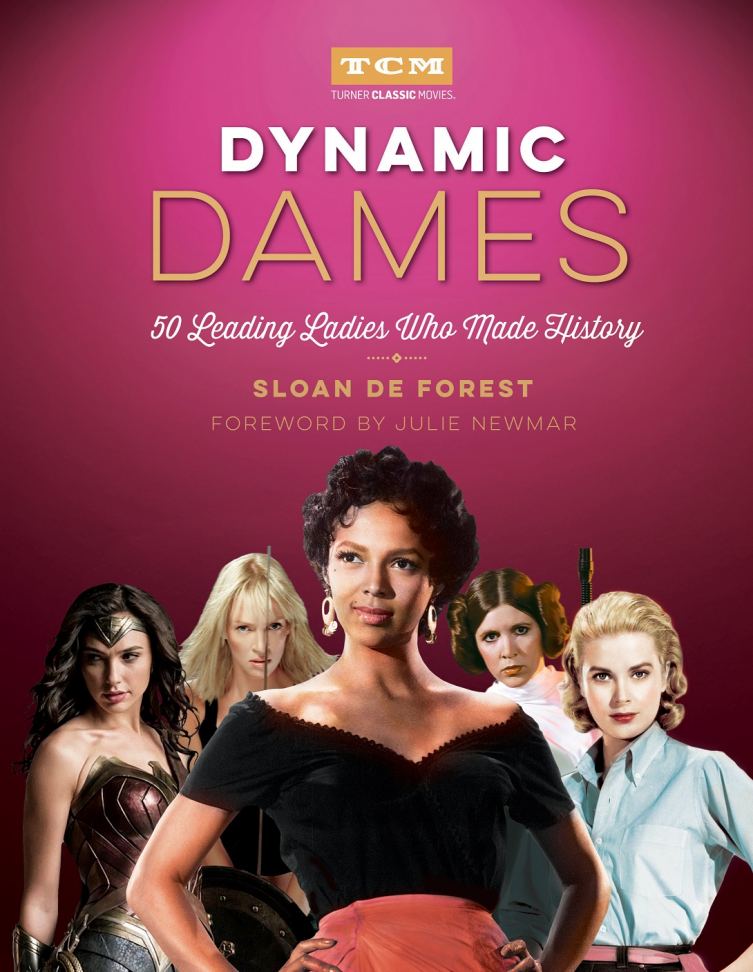 Focusing on 50 legendary actresses in their most exciting roles, the Turner Classic Movies-branded DYNAMIC DAMES takes readers on an inspiring journey through film history as filtered through the lens of powerful women "who inspire us with their courage, brains, and integrity, and also the multi-talented women behind the characters," says the author.

From the Jazz Age superstar Clara Bow to the contemporary embodiment of Wonder Woman, Gal Gadot, De Forest presents readers with a dazzling collection of strong characters and the women who brought them to life.

Here is the irrepressible, unapologetic Mae West, who wrote her own racy, boundary-pushing scripts; Dorothy Dandridge, who fought racial discrimination in Hollywood to become a major star in the 1950s; the formidable powerhouse Bette Davis; Julia Roberts, in her powerful incarnation as the environmental activist Erin Brockovich; Whoopi Goldberg and her heart-wrenching portrayal of Celie, in "The Color Purple"; and Joan Crawford as the self-made, tragic heroine Mildred Pierce.

More on eTradeWire News
"Author Sloan De Forest delivers with this captivating feminist manifesto," notes Raquel Stetcher, of the Out of the Past blog. "The writing is engaging, and the narrative voice is whip-smart and clever."

Booklist's Michael Ruzicka declares that "Turner Classic Movies expands on its growing library of resourceful film compendiums by … exploring the unmistakable impact that female actors have played in the medium's history. De Forest has expertly arranged this gift-worthy volume."

"It is my hope that this book will function as a gateway to exploring these and more aspirational female characters, not as a definitive list of the greatest women in cinema. That would require several volumes!" De Forest writes in her introduction to DYNAMIC DAMES.

Featuring a foreword by venerable performer Julie Newmar, DYNAMIC DAMES offers crisp, knowledgeable writing accompanied by a collection of vivid photographs that will attract serious film buffs and casual readers alike. The book is an essential addition to any movie history library.

Sloan De Forest is a writer and film historian. As a relative of talking-pictures pioneer Lee de Forest, she has classic movies in her blood. Sloan is the author of Dynamic Dames: Fifty Leading Ladies Who Made History and Turner Classic Movies Must-See Sci-Fi: Fifty Movies That Are out of This World. She is a contributing author of Natalie Wood: Reflections on a Legendary Life by Manoah Bowman and Grace Kelly: Hollywood Dream Girl by Jay Jorgensen, and has written about film for Sony, Time Warner Cable, the Mary Pickford Foundation, and Bright Lights Film Journal. Sloan has also appeared on Turner Classic Movies, and as a commentator for CNN's television documentary The Movies. She lives in Hollywood—mentally, spiritually, and geographically.