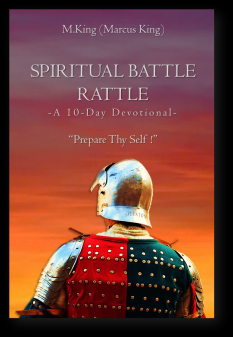 Prepare to Mount a Defense, by Squashing the Lies of the Devil.
MESA, Ariz. - eTradeWire -- M.King, Founder & President of M.King Media INC. recently debuted a devotional that aims to help believers as they fight the good fight of faith. This devotional called "Spiritual Battle Rattle", looks at 10 lies the devil has sold to the church and how God's word not only contradicts these lies, but also wants to embolden and empower God's people to be made for more.

"We are living in a day and time when the great commission looks like it's being fulfilled more by Satan than the church," M.King said recently. "Jesus said to be fishers of men, well Satan wants to mimic God and what better way to fish for men than to lie to them. This devotional aims at taking lies such as "What are you going to do to impress me" and "Christians Are Supposed to Tell Everyone Everything?" and holding them against the framework of the Bible to help people know what God says and give people the victory they deserve."

M.King reflects on the message of the devotional in this recent video
https://www.youtube.com/watch?v=1gMhz7gUq28

About M.King Media INC.  M.King Media INC. is a Christian media non-profit based in Mesa, AZ. Founded in 2013, M.King Media has created more than 185 media projects and distributed them all over the world. M.King Media's mission statement is "To Make Creative Christian Media That Points People to Jesus Christ. " For more info go to mkingmedia.com