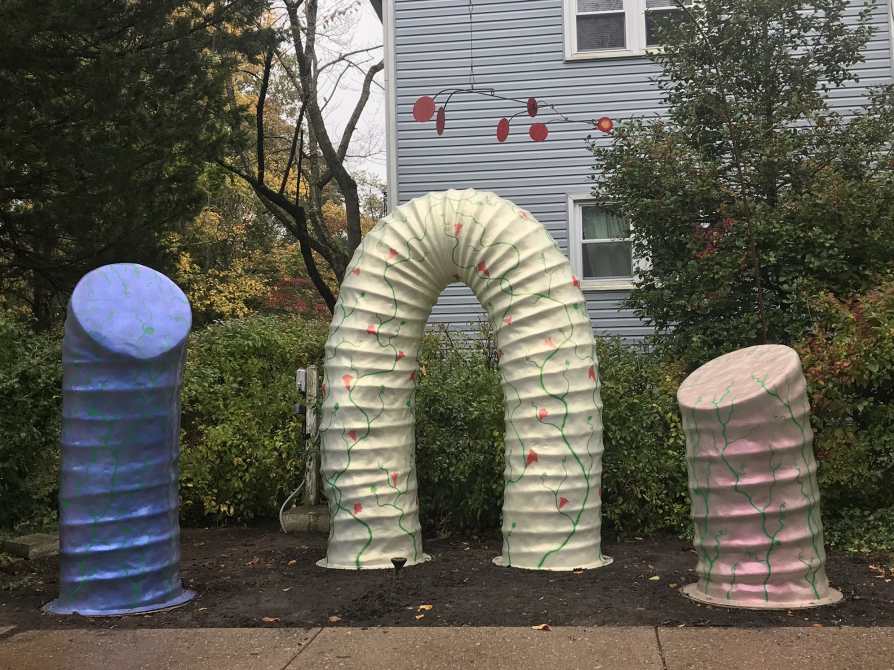 British-born photographer turned sculptor, Christopher Kennedy, unveiled his 8 1/2' tall, 3-piece sculpture 'Exhibitionist' October, in New Hope, PA. 'Exhibitionist' was a popular winner of the New Hope Arts Outdoor Sculpture Contest. Exhibitionist features a mesmerizing LED light show.
NEW HOPE, Pa. - eTradeWire -- Christopher Kennedy, known for his Photo Luminism® photography, had never considered building a sculpture. But back in 2016 he received an email from a friend to local sculptors, inviting them to enter the New Hope Arts Outdoor Sculpture Contest. Kennedy dismissed his inclusion as a mistake, but after a day or so the seed began to grow. He searched his archives and found some images that might work. He gave no thought as to how it could be built. "There's no way I'd win anyway," he mused, "so why not!" Kennedy printed a detailed mock-up and submitted his proposal.

Weeks later it was announced that 'Exhibitionist' had won! Kennedy was overwhelmed while almost immediately filled with dread. After considerable research he settled on fiberglass for the structures and found Mark Hutzky of RemarkableCreativeServices.com on the internet to help. Kennedy wanted to be hands-on throughout and Mark was not only open to mentoring him, but also letting him use his Poconos workshop as well. They became an unstoppable team.

More on eTradeWire News
Somewhat technically minded after years of photographing lights, Kennedy designed and built the wire rigging, and installed the almost 2000 LEDs that would provide his mesmerizing light show. But realizing his limitations, he sought help from Kevin Darrah at kdcircuits.com for LED design and programming, and 1SEOtech.com for the vital ethernet connections.

It took six brutal months over 3 years to finish the project. All that time the New Hope Arts team was searching for a suitable installation spot in the Borough. Finally, everything fell into place and on October 18th, 2019, Christopher Kennedy's 'Exhibitionist' was unveiled and illuminated in the charming riverside town of New Hope PA. It was without a doubt fate that 'Exhibitionist' came to rest at the Studio Sculpture Gardens. The property is owned by JaQuinley Kerr, and it was JaQuinley's mother, Pamm Kerr who wrote that life changing e-mail three years earlier. The story had come full circle.

More on eTradeWire News
The public is encouraged to interact with 'Exhibitionist' every day. It stands next to the sidewalk at 131 North Main Street, New Hope, PA where parking is easy. Illuminations begin at twilight and continue until 10:30pm daily. With patriotic swirls, sparkling city lights, candy cane and of course a dizzying gay pride rainbow, you won't want to miss capturing a video selfie with Christopher Kennedy's ground breaking sculpture, 'Exhibitionist'!
#exhibitionistnewhope
YouTube video of Exhibitionist
www.newhopearts.com