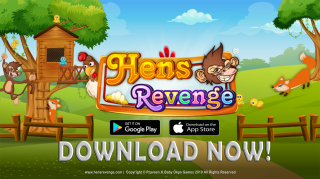 HEN'S REVENGE is now available to play on all Android phones after the game's developer OKPO GAMES released a new beta update of the game.
SAN JOSE, Calif. - eTradeWire -- If you're still waiting to get into Hen's Revenge on Android, now you can finally play the Chicken game on your phone. Today Okpo Games announced that the Android version of the game is open to everyone with a compatible device, so you no longer require an invite to play.

Hen's Revenge can be downloaded by going to GooglePlay on any Android smartphone. The hen and Monkey have to get through the terror of cunning Fox. The hen becomes angry and inclined towards sustaining their chicks from greedy fox. To take revenge the hens will use their eggs to attack the cunning fox.

More on eTradeWire News
Revenge on the greedy Fox who kidnapped her chicks. Begin here.  The game is very simple and basic to play, yet it is creative and challenging. Okpo Games is an indie game developer and publisher.

Lots of game levels. Play hundreds of levels with more added in regular updates and limited time events. Facebook Leader boards to compete with your friends and competitors.