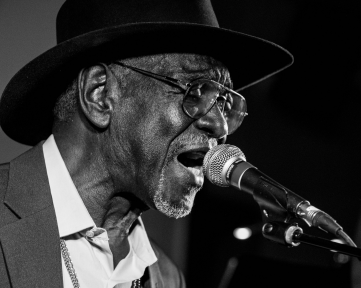 LANCASTER, Pa. - eTradeWire -- All My Dues Are Paid, the January 17, 2020 release from Frank Bey, has been nominated for Best Traditional Blues Album in the 63rd GRAMMY Awards.  Bey's sophomore Nola Blue Records release followed his award-winning 2018 album, "Back In Business."

Thirteen eclectic yet purposefully-chosen tracks conclude with "a 6-1/2 minute version of John Lennon's "Imagine" that slowly builds to a thrillingly testifying climax.  It neatly sums up all the hope and resilience that, in the face of pain and struggle, beat in the heart of Bey's music," wrote Nick Cristiano in his review of the album.  Other reviewers cited the album as their picks of the year for 2020 and projected not only nominations but wins for Bey's career-culminating masterpiece.  All My Dues Are Paid reached number one on the Australian Roots and Blues International Blues Chart, in addition to peaking at number two on the Roots Music Report Blues Album Chart, the Living Blues Radio Chart and the Collectif des Radios Blues Chart.

More on eTradeWire News
Born in Millen, Georgia in 1946 and starting his musical career in gospel at the tender age of four, Frank Bey is a six-time Blues Music Award nominee.  A beloved international performer and recording artist, he was a resident of Philadelphia at the time of his passing on June 7, 2020.  A feature documentary film, You're Going to Miss Me (working title), is currently in post-production pending additional funding necessary for completion.  It documents Bey's extraordinary courage, resilience, and strength in continuing to inspire his listeners and fans through his wonderful music in spite of the many obstacles that his health issues placed before him.