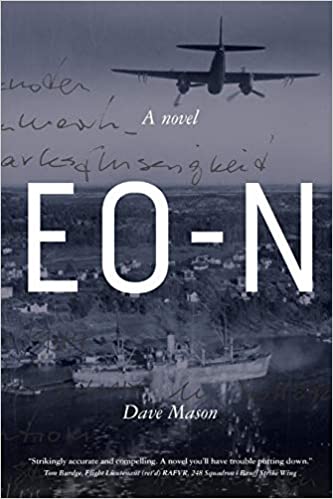 Dave Mason's new novel "EO-N," winner of the Best Historical Fiction Award in the Reader Views Literary Awards, tells an incredible story of fear and courage, disillusionment and hope, love and loss, and guilt and redemption.
CHICAGO - eTradeWire -- The discovery of a small piece of metal on a glacier in Norway leads a woman into her family's past and the world into new hope in Dave Mason's stunning debut, award-winning novel EO-N (ISBN: 9781735706412, Hellbox Editions, 2020).

EO-N, winner of this year's Best Historical Fiction Award in the Reader Views Literary Awards, opens in 2019 when a young boy and his dog stumble upon a mysterious piece of metal while playing on top of a glacier in Norway. That discovery ultimately launches Alison Wiley—the weary and disillusioned CEO of a Seattle-based biotech company—on a physical, intellectual, and emotional journey into her family's unknown past. Through a series of fast-paced chapters, the scene switches back and forth between Alison, her grandfather Jack, a Government of Canada investigator, a young victim of appalling cruelty, and a German officer, all of whose lives will end up being closely connected.

More on eTradeWire News
Dave Mason's extensive research into World War II and the Royal Canadian Air Force makes the past come alive in detailed, realistic ways that put readers right into the cockpit with Jack and on a top of a glacier with a young boy. Perhaps most importantly, Mason writes with intention as he tells a story of atrocities from which compassion and courage arise. It is not surprising, therefore, that Reader Views took notice of this book's special contribution to historical fiction in this year's literary awards.

Tyler R. Tichelaar, winner of the 2009 Reader Views Best Historical Fiction Award for his novel "Narrow Lives" and the award sponsor since 2010, says of this year's award-winning novel, "EO-N is that rare mix of history, mystery, and thriller that keeps us turning the pages, but beyond that, it's a story of true human compassion in a time of crisis—the kind of story that gives you goosebumps and makes you want to go out and change the world like Mason's characters do. It's a novel to read, reread, and be inspired by."

Reader Views reviews more than 2,000 books per year by self-published and small press authors. Its Annual Literary Awards recognize the very best of these up-and-coming authors. EO-N joins a series of previous historical fiction winners on such diverse topics as eighteenth century pirates, opera composers, the Civil War, World War II, the Vietnam War, and the founding of Louisiana.

More on eTradeWire News
Sherri Hoyte of Reader Views says EO-N is "a novel of distinction—impeccably written, every sentence captivating…. The scenes describing the excavation of the aircraft show such striking detail, you'll feel like you're a part of an archaeological dig."

Entrada Publishing calls it "a compelling first novel." Readers Favorite says it is "clever and impressive." And The Prairies Book Review declares EO-N to be "a gripping adventure, a history lesson, and a cautionary tale of loss, redemption, and humanity." In short, EO-N is a book that celebrates the courage and compassion that arose out of World War II.

Dave Mason is an internationally recognized graphic designer, the cofounder of a number of software companies, and a former high school football coach and diamond core driller. Born in England and raised in Canada, he divides his time between Chicago, Illinois, and Lunenburg, Nova Scotia. EO-N is his first novel.