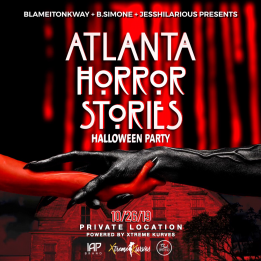 More on eTradeWire News
Atlanta Horror Stories will feature more than 6000 square feet of Halloween inspired decor, interactive photo areas, great music, specialty cocktails and of course spooky fun. There will be tons of surprise guests and attractions. Join Kway, B & Jess along with some of their celebrity friends at the biggest and best Halloween party ever.
There is also a $1000 cash giveaway for the best costume.
"COSTUMES ARE STRONGLY ENCOURAGED" says Kway Rogers. "The goal is to make sure this gets bigger and better every year for our fans. I want them to get a moment to get close to us. See how we party, you know?!" The social media heavyweight stated.

Atlanta Horror Stories tickets can be purchased through eventbrite.

Kwaylon Rogers (better known as BlameItOnKway) is a comedian and social media personality. He is best known for his short sketches on Instagram and YouTube where he often plays the character of Titi. Kway made his stage debut in Tyler Perry's Madea Farewell Tour. Prior to that he has worked with Jennifer Lopez, Janet Jackson, Tiffany Haddish and more. He has more than 4 million followers on Instagram. Kway is also the owner of Krab Queenz Restaurants in Houston, Los Angeles and Atlanta.

More on eTradeWire News
Jess Hilarious is a Stand-Up Comedian who is best known to television viewers for her appearances on VH1, BET, and more. Jess hails from Baltimore, Maryland and first came to popularity through her Instagram comedy skits, which have amassed over 4.6 MILLION followers to date.
A hard working Mom, she often includes her young son Ashton in videos and her segment "Jess With The Mess" is a social media sensation. Her comedy is witty and to the point. When it comes to the funny Jess holds NOTHING back.

Born on April 5, 1990, B Simone is an American singer, actress, and social media personality who is best known for her content on her Instagram account and gained popularity for her appearance on the MTV show Wild 'N Out

Source: I AM PHRESHY BRAND