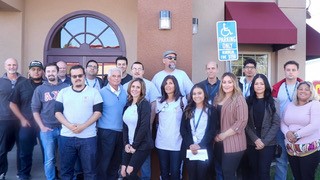 The Red Brennan Group, a local non-profit dedicated to "Big-Hearted Communities and Small Government" will deliver over 34,000 signatures to the San Bernardino County Registrar of Voters.
SAN BERNARDINO, Calif. - eTradeWire -- The group is spearheading an effort by county residents to place repeal of the special tax associated with Fire Protection Zone Five (FP-5) on the November 2020 ballot. The special tax was imposed by the San Bernardino County Board of Supervisors in response to a burgeoning shortfall in the San Bernardino County Fire Protection District's budget. Primarily targeted against residents of the county living in unincorporated areas, the tax was approved by a 3 – 2 vote of the Board of Supervisors rather than the two-thirds voter approval standard required by the state's constitution.

When & Where – The signatures will be delivered by representatives of The Red Brennan Group at 10:30 AM on Tuesday, February 11th to the San Bernardino County Registrar of Voters office located at 777 E. Rialto Avenue, San Bernardino, CA 92415.

More on eTradeWire News
Why – Affected residents contend the Board of Supervisors, acting under advisement from senior county bureaucrats, violated Article XIII C Section 2. (d) of the California's Constitution which states "No local government may impose, extend, or increase any special tax unless and until that tax is submitted to the electorate and approved by a two-thirds vote."

After being stymied by the courts, a grass-roots effort to collect signatures for an initiative petition to place repeal of the tax before the voters kicked off in August of 2019. According to San Bernardino County Counsel's office, 26,153 signatures would be required to qualify the petition for the November 2020 ballot. After exceeding this requirement by thirty percent, petition drive organizers, assisted by the Howard Jarvis Taxpayers Association, found that the actual signature requirement under California's Constitution is likely 7,800 valid signatures.

If you would like more information about this topic, please call Tom Murphy at (760) 810-5830, email tmurphy@redbrennan.org or path to https://redbrennan.org/fire-prevention-zone-five-expansion/, scroll two-thirds down the page and review the documents titled "Press Release."