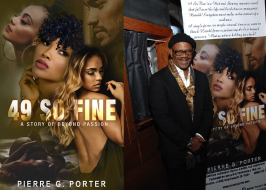 PHILADELPHIA - eTradeWire -- A night spotlighting the signing and reading of a hot, new romance book had taken place at the Southside Restaurant in Philadelphia in late October.

Writer Pierre G. Porter's fictional novel, "49 So Fine", was in the spotlight, alongside Philly-based radio personality Rhonda Supreme – who hosted that evening's event – and actor/boxer Terry Quintero Moore, who along with Ms. Supreme read a chapter from the book.

The evening was well attended by over a hundred gatherers who had an autographed copy of "49 So Fine" from Arthur himself. Guests included boxing heavyweight champion Hazel "The Latin Lover" Roche, lightweight champ Kelvin "Special K" Kelly and PA-area media.

Host Rhonda Supreme engaged in a lively reading from the novel with Terry that tickled and pleased the audience.  Quintero Moore, whose acting credits include the films "Creed" and "Dark Child". Moore read the part of the main character "Harold Longston" while Ms. Supreme handled the role of "Yvette".

More on eTradeWire News
Based in Philadelphia, Pierre G Porter (also known as businessman Arthur Morton) is the founder/president of Lotus 1016 Publishing and Films. "49 So Fine" is Morton/Porter's first ever love novel after writing many books in other fields of interest. In authoring "49 So Fine" as Pierre G. Porter, this allowed Morton to open a door and to provide a platform for others to explore and experience what it means to pursue not just any kind of love, but a love beyond passion in an imperfect world as imperfect men and women.