Amid the Growing Crisis of Bible Illiteracy, Children's Book Author Offers a Fun Story to Inspire Kids to Read Scripture 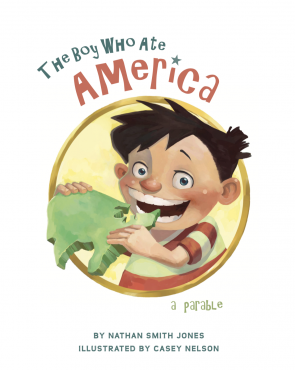 CHANDLER, Ariz. - eTradeWire -- For years, Bible Illiteracy and Bible apathy has been on the rise (https://www.mnnonline.org/news/decline-bible-literacy/) in the United States, even though 70% of Americans respect the Bible and 60% wish they read it more, fewer and fewer people today take the time to read it.

Told in fun rhymes (similar to ''Twas the Night Before Christmas'), and just as the title suggests, the story is about a boy who eats the entire country, then realizes (through help from his mom) the principle that we as humans need more than just physical food to survive.

Illustrated by Casey Nelson, a recent graduate of the prestigious Savannah College of Art & Design in Georgia, the book's fun illustrations are more than half of the fun, says the author.

More on eTradeWire News
Jones explains how it all started. "I guess it was unconscious at first," he says. "For a while I'd noticed that there aren't very many 'big' metaphors that express universal truths in the stories out there for children, and then one day the story just popped into my head. It was a year after that I made the whole story rhyme."

In the story, after eating every state in the union, the boy's mom cites the bible, reminding her son that "man shall not live by just bread alone."

And then after feeling the strangest sensation, from out of his foot popped the entire nation!

When asked about this choice, Jones gives a common sense answer. "People ask why I didn't simply have the kid throw up or vomit out the country that he ate, and I guess the answer is that I didn't want to offend anyone with an eating disorder. And, since it's a pretty fantastical story anyway, I thought I'd keep it light and fun so that the focus can be on the book's message."

And why is Kansas the last state the boy eats?

"Kids have fun with their food. I knew he'd eat the center last," says Jones.