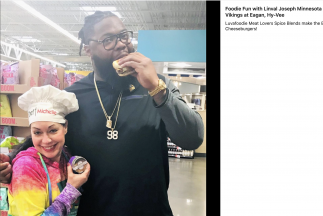 Watch for Cooking Segment Wednesday May, 18th on WCCO's Midmorning Show
MINNEAPOLIS - eTradeWire -- There are several things you can never say about Minnesota Chef Michelle Mazzara. Never say she is not one of the hardest working Foodies around. Between running a national spice business (an official sponsor of Super Bowl LII) and hosting live streaming shows on LinkedIn, there aren't enough minutes in a day. Also- never say she isn't up to a challenge. As a Semi-Finalist in the premiere season of America's Best Home Recipes (ABHR), Chef "#LuvAMichelle" promises to deliver the ultimate recipe for this upcoming Memorial Day.

Another thing you can't say is that Chef Michelle is a newcomer to TV News. Since 2014, she has appeared as a guest on networks around the country. Her next appearance is coming on Wednesday, May 18th in a special Memorial Day cooking segment on WCCO's Midmorning Show (approximately 9:00-10:00am CST). She will preview a variety of holiday recipes (including the one to be featured on ABHR?).

The Minnesota native spends most days tending to the needs of her locally grown spice company, Luvafoodie (www.Luvafoodie.com). Launched in 2014, when it is not sponsoring football games, the brand is available at Hy-Vee, other grocery retailers, as well as online on Walmart and Amazon. She and Chef Mick met online years ago, and have always supported each other's endeavors. They both also approach Social Media the old fashioned way- as a means to establish true connections with customers and other professionals in your field. Chef Michelle posts on a wide variety of themes, daily on several platforms.

More on eTradeWire News
In the Pro Bracket of America's Best Home Recipes- Memorial Day edition, Chef Michelle (#ChefLuvAMichelle) will face off with award winning Indiana Chef Mick Regan (#ChefIndianaMike) for Best Burger. The victor will then face the Amateur Chef Bracket winner in the Finals. Episodes will be available on website www.SizzleWithChefMick.com, Vimeo, YouTube among other platforms TBA.

Stay tuned for ABHR updates as Amateur Chef Semi-Finalists are announced this week.