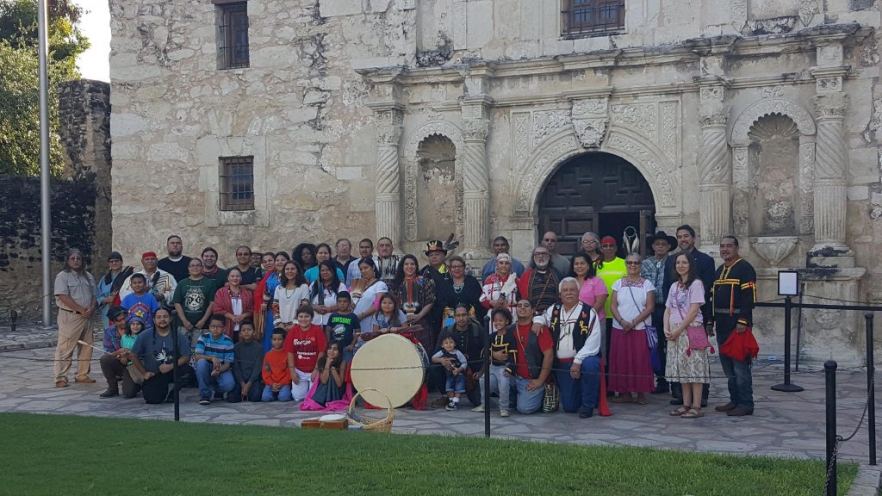 Texas Historical Commission to rule on historic cemetery designation.
SAN ANTONIO - eTradeWire -- In the midst of major renovations at the Alamo, the Tap Pilam Coahuiltecan Nation, (TPCN), an American Indian tribe based in San Antonio, filed for and received a Historic Texas Cemetery designation from the Texas Historical Commission.  The designation boundaries encompass the majority of the Alamo Plaza in downtown San Antonio, a historic site which likely contains the human remains of Coahuiltecan Indians from the Spanish-colonial era.

The Tap Pilam Coahuiltecan Nation, a tribe comprised of both direct lineal descendants and members with historic cultural affiliation ties to the Coahuiltecan Indians who lived at, got baptized in, and were buried at Mission San Antonio de Valero (the Alamo) during the eighteenth and early nineteenth centuries, is demanding a comprehensive archeological study at the Alamo Plaza site.  The tribe is also demanding a seat at the table with project developers of the major renovations, dubbed the Alamo Redevelopment Master Plan Project and scheduled for completion in 2024.

Established on its current site in 1724 as a Spanish Catholic mission to convert the indigenous peoples of the region, Mission San Antonio de Valero, more commonly knowns as the Alamo, is perhaps best known for its role in the Texas War for Independence in 1836.  For modern day descendants of the Spanish colonial-era Mission Indians, the site has an older meaning as a place where their ancestors strategically took residence to ensure cultural survivance. Included in the Tap Pilam Coahuiltecan Nation's petition for Historic Texas Cemetery designation was archival evidence, such as burial records from the Spanish colonial-era, nineteenth century maps, twentieth century archeological studies, and numerous historical newspaper articles spanning the twentieth century.

More on eTradeWire News
Despite the designation from the Texas Historical Commission as Historic Texas Cemetery on May 10 2019, and concessions from the same agency in at least two letters to the tribe expressing that it has "no doubt there were hundreds of individuals buried in and around Mission San Antonio de Valero during the Spanish-colonial era" and "the potential to encounter human remains within the Alamo Redevelopment Project area should be a primary concern for the Project," a comprehensive archeological study has yet to be completed at the site. Instead, renovation project planners including the Texas General Land Office (the custodian of the Alamo), and the private non-profit Alamo Trust Inc., which handles daily operations including renovations, maintain there are no human remains outside the immediate chapel area of the Alamo.  Nonetheless, their "Appropriate Treatment of Human Remains Encountered During Alamo Complex Investigations" protocol is an irresponsible and disrespectful attempt to account for "the unintentional encounter of human remains" as work moves forward.

Ramón Vásquez, Executive Director of American Indians in Texas at the Spanish Colonial Missions, a non-profit entity of the Tap Pilam Coahuiltecan Nation explains  "The Texas Historic Commission has the legislative mandate to protect cemeteries and THC has acknowledged on several occasions burials at the Alamo Cemetery. We recommend that the GLO, Alamo Trust Inc and the City of San Antonio follow the same procedures they follow across other cemeteries in the state of Texas, and a due diligent Archeological Study on the Alamo and Alamo Plaza is a necessary step"

More on eTradeWire News
The Tap Pilam Coahuiltecan Nation has fought for the return of ancestral remains around San Antonio since 1994 including from both Mission San Antonio de Valero (the Alamo) and Mission San Juan Capistrano, resulting in several repatriations and reburial ceremonies of ancestral remains. Nonetheless, the Texas General Land Office and Alamo Trust Inc. have refused to give the tribe a seat at the table, instead convening a group of representatives from federally recognized tribes whose members are, based on Spanish colonial-era records from the mission, unlikely to be direct lineal descendants of any human remains that might be unearthed during the renovations.  We can close reiterating the demand for a comprehensive archeological study, with the demands to follow Texas Antiquities Code and Health and Safety Code (next of kin), and the demand for a seat at the table.

TPCN is a Tribal community of affiliated Bands and Clans of the Payaya, Pacoa, Borrado, Pakawan, Paguame, Papanac, Hierbipiame, Xarame, Pajalat, Tilijae nations, modernly known as Coahuiltecans.   Its traditional homeland consists by today's political boundaries as Texas, Coahuila, Tamaulipas, Nuevo Leon, and Northern Potosi. Tāp Pīlam are people of two Countries and have been regarded by both as foreigners in its own homeland.